WHAT TO DO IN DUBAI: VISIT BURJ KHALIFA THE HIGHEST BUILDING IN THE WORLD

Since its inauguration in January 2010, the Burj Khalifa has become one of the main symbols of the city of Dubai and of the enormous wealth it contains. The Burj Khalifa, owned by Emaar Properties, one of the most important construction multinationals, broke the Taipei 101 record with a height of 829.8 meters, becoming the coveted tallest skyscraper in the world. The name of the record-breaking Burj Khalifa is a tribute to the President of the United Arab Emirates and Abu Dhabi’s Emir Khalifa bin Zayed Al Nahyan, and it doesn’t stop at its heights. The 154 floors of the building (excluding the 9 service floors), along with the 57 elevators, are characteristics of other world records. Let’s take a closer look at this record-breaking building and its unique features.

THE BURJ KHALIFA STRUCTURE IN DUBAI

Construction of the Burj Khalifa took place over a five-year period, from 2004 to 2009. It has a skeleton made of reinforced concrete and recycled steel from the demolition of the former Berlin republic palace. It was demolished in 2008. The cladding, on the other hand, is made up of over 26,000 glass and aluminum panels. This coating also contributes to the energy performance of the skyscraper. The solar panels that surround the building in fact therefore constitute the main source of energy for heating the water inside the building’s hydraulic system. The creator of the construction project of the Burj Khalifa is undoubtedly the architect Adrian Smith, who has already signed other impressive skyscrapers such as the Jin Mao Tower in Shanghai or the Trump International Hotel and Tower in Chicago. Unlike these two, however, the Burj Khalifa consists of a very particular shape of the base, which then models the entire building. This is in contrast to the more classic rectangular or circular skyscrapers. Adrian Smith has in fact decided to design the structure of the Dubai skyscraper inspired by the lines of a local flower. Do you know which one? well the Burj Khalifa,, takes its peculiar three-branch shape from the structure of the petals of the Hymenocallis flower (hymenocallis). 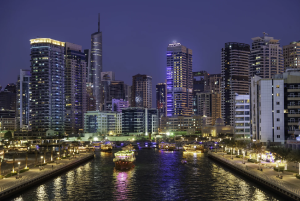 VISIT THE BURJ KHALIFA IN DUBAI

The Burj Khalifa is a truly intriguing attraction worth visiting in Dubai. Inside, it houses attractions and views that give the visitor a unique experience in the world. On the thirty-eighth and thirty-ninth floors it is possible to stay in luxurious suites designed and cared for in every detail by the famous Italian fashion house Armani. The price for a night of extreme luxury in Dubai at the Burj Khalifa is around € 400. While a night in more comfortable and spacious suites with splendid balconies is close to € 1000. Incredibly beautiful is the Armani Dubai Suite, which exclusively occupies the 398th floor and offers an unparalleled surface of 390 square meters, personally designed by the owner Giorgio Armani.

Eating inside the most beautiful skyscraper in the world is a unique experience. In addition to the breathtaking view of Dubai by night, you can enjoy a high-level dinner at Atmosphere.  A tallest restaurant in the world “, is located on the 122nd floor, at a height of 442 meters. Here we are inside one of the highest viewpoints in the world. The various observation points that the public can visit inside the Burj Khalifa are simply spectacular. In fact, we pass from the 456 of the At The Top observation point, up to the 585 of the highest Lounge area in the world. Obviously, the ticket prices for this area change according to the type of experience you want to do during the day: you therefore go from almost  $ 220 for the VIP version, in which you can spend the day on the 155th floor of the building, up to $ 65 for a visit to “At The Top”, enjoying its 360 ° window..

CURIOSITY AND DISPUTES ABOUT BURJ KHALIFA THAT HAVE CHARACTERIZED ITS CONSTRUCTION

Behind the luxury and splendor of the Burj Khalifa, there is also a more controversial side that has characterized this record-breaking building since its earliest stages of construction. In fact, there are several inquiries on the condition of the workers who contributed to making the Burj Khalifa reach its 829 meters in height. In fact, the project workers, mostly workers coming mainly from India and Pakistan, have suffered heavy exploitation with wages below € 5 per hour. In return, the workers performed tasks that required a great deal of physical exertion and high building skills. Furthermore, the apartments that housed these workers have often been described as unlivable places and the labor camps turn into overcrowded and neglected conditions according to a survey carried out by the BBC..

What are you waiting for, then give or give yourself fantastic emotions and experiences as a couple or as a family together with your children. Give yourself or even give a Parchibox amusement park box to write a new page of the adventure book of whoever you want, leaving them an unforgettable memory.